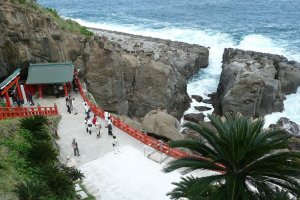 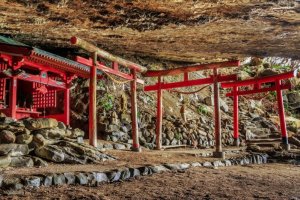 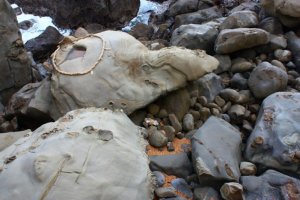 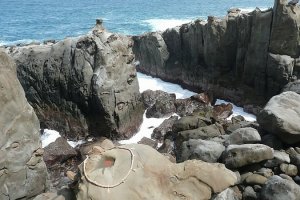 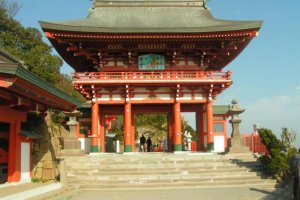 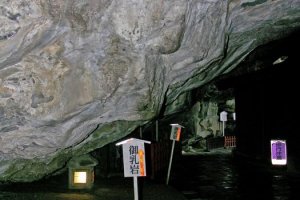 Udo Jingu Shrine is one of Japan's rare coastal shrines, situated along the Nichinan coastline south of Miyazaki City. Overlooking the Pacific Ocean, the path leading towards Udo Jingu Shrine is lined with beautiful Torii gates and flanked by rocky shores. Udo Jingu Shrine is dedicated to the worship of Yamasachihiko, the Father of Emperor Jimmu. Emperor Jimmu is one of the most important historical figures in Japan, believed to be the country's 1st Emperor; the current royal family is said to be his descendants.

The shrine grounds span over 1000 square meters, with the shrine building being hidden within a cliffside cave boasting a magnificent view of the ocean. Udo Jingu Shrine's main building is a brilliant vermillion red and is known for blessing worshippers seeking good fortune in childbirth, matchmaking, marriage, and a safe voyage at sea.

The outer gate of Udo Jingu Shrine is called Shin-mon. Shin-mon marks the entrance to the realm of the gods, signifying to visitors that they are now entering a sacred space.

Marked with a circular rope is the famous Turtle Rock, where visitors to Udo Jingu are encouraged to throw their clay Undama balls into the center of the rock. The lucky Undama can be purchased at the shrine itself, and it is recommended for men to throw with their left hand and women to throw with their right. Landing an Undama in the center of the Turtle Rock is said to make your wishes come true.

This dripping stone structure got its unique name from a myth involving Toyotama-Hime — the daughter of the god of the sea, who gave birth in this cave. During childbirth, she asked her husband to refrain from looking at her non-human form, but he did so anyway which resulted in her needing to return home to her father and leave her family behind. Before she left, she removed her breasts and stuck them onto the walls of the Udo Jingu cave — in order to let her children remember her when they grow up. Now, the water that drips from the Ochichi Iwa is used to make a local confectionary called Ochichi-Ame; which is believed to improve the production of breast milk for expectant mothers and bring good luck to those trying to start a family.

Within the cave, you will also find the Nade-Usagi Patting Rabbit Statue. This rabbit is said to have been a servant to the gods of the shrine. Patting the rabbit statue is believed to bring you good fortune and good health.

JR Miyazaki Station to Ihii / Aburatsu Station via JR Nichinan Line, followed by a 20-minute local bus ride to Udo Jingu Shrine stop. From there, it's a 10-minute walk to the shrine grounds.