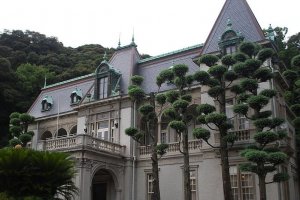 Most may not expect to find a French-style villa below Matsuyama Castle, but the elegant structure offers some respite from the bustling urban center of Ehime. Bansuiso, largely hidden by trees and modern buildings, was originally the second home of Earl Hisamatsu Sadakoto, a descendant of the Matsuyama samurai clan and former lord of the neighboring castle.

After living in France and returning with a love of neo-Renaissance architecture, he ordered for the construction of a chateau with all the fashionable trimmings—beautiful fireplaces, stained glass windows, chandeliers and of facade fit for a prince. The property even simulates a countryside location with its surrounding rich greenery. Completed in 1922, the villa was the site of numerous elite parties and social gatherings, and even welcomed members of the imperial family as guests, including Showa emperor Hirohito.

Now it is less exclusive but, having come out of the war unscathed, just as beautiful. Bansuiso serves as an arts and culture venue as well as a sightseeing spot. The first floor and basement are free admission, and for ¥300 visitors can ascend a wooden staircase for more photo opportunities. Although the chateau houses solo exhibitions, it also contains its own murals and portraits, including the likeness of the first owner.

On the first floor is a dazzling dining room that was converted to an upscale French restaurant when U.S. forces requisitioned the building in 1945; now it is a concert and exhibition hall. On the second floor are exhibited various works of the nation’s preeminent haiku association. After exploring the main building, you can check out the little tea house and Japanese garden on the grounds, or the haunts of novelist Natsume Soseki outside the urban villa.

5 minutes on foot from Okaido Station.

Matsuyama Castle is a flatland-mountain castle that was built in 1603 on Mount Katsuyama, whose height is 132 meters, in Matsuyama city in Ehime Prefecture.[Wikipedia]..

Thought to be at least 1000 years old, Isaniwa is one of Japan’s three shrines dedicated to the deity Hachiman. After climbing a long stretch of stone..