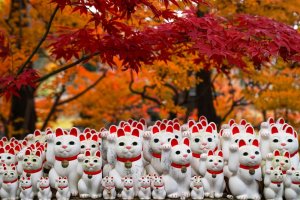 Gotokuji Temple is an Edo-period Buddhist temple that's referred to as the birthplace of the maneki neko. Located in Setagaya, Tokyo, Gotokuji temple is a popular spot for cat lovers due to the prevalence of the maneki neko figurines placed around the temple grounds. The maneki neko is a prominent Japanese figure that's often seen in shops, with its beckoning paw inviting in good fortune for the owner.

Maneki neko is believed to have originated from Gotokuji Temple itself. Back in the Edo Period, a feudal lord passed by the temple and bumped into a cat that beckoned to him to come in. Afterward, he realised that the cat had saved him from the coming thunderstorm, by letting him seek shelter at the temple. Grateful for the kind act by the cat, the lord decided to rebuild the temple into the Gotokuji it is today.

The highball is a popular drink for both men and women. The diverse selection of highballs at this specialized bar will make your night magical.

Sangenjaya is an area within the Setagaya district in Tokyo. The name Sangenjaya means "three tea houses", but the locals often refer to it simply as..

Komazawa Olympic Park located on land in both Meguro and Setagaya, Tokyo, Japan, is a sports facility that was constructed for the 1964 Summer Olympics...

Shibuya Fukuras is an 18-story multi-purpose building filled with a wide array of interesting and useful spaces to anyone visiting the Shibuya district...