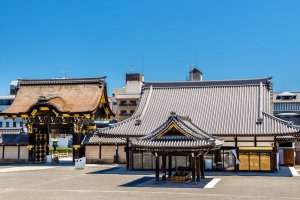 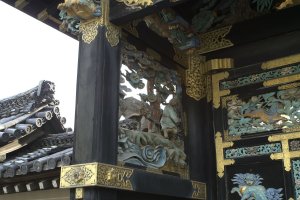 Within the temple grounds, several structures have been designated as National Treasures or Important Cultural Assets. This includes a Noh stage, Drum Tower, Goeido Hall and more. Most structures within Nishi Hongwan-ji are adorned with gold trimmings and elaborate architecture. Nishi Hongwan-ji is also regarded as part of the Historic Monuments of Ancient Kyoto.

Being a mere 10-minute walk from Kyoto station, its central location makes Nishi Hongwan-ji one of the most accessible UNESCO Heritage Spots in Kyoto. Originally, the temple was located at the site of Shinran’s (founder of Shin-Buddhism) burial at Otani Mausoleum.

The huge complex is also filled with greenery, with a 400-year old Gingko tree right outside the Goeido Hall. If you’re lucky enough to visit Nishi Hongwan-ji during autumn, you can view this Natural Monument in its full golden glory. Other highlights include the Karamon gate, Goeido and Amidado.

This impressive golden gate is known as the Karamon, or “Chinese Gate”. It is also said to be the “all day gate”, as one can spend all day admiring its ornate carvings and design. Originally built around 1598, the Karamon was meant to be part of Toyotomi Hideyoshi’s castle. It has since been designated as a National Treasure, one of only six such structures to attain this status. Photo: Hideyuki Kamon / CC BY-SA 2.0

Goeido, also known as the Founder’s Hall, is the main building of Nishi Hongwan-ji. After being rebuilt it 1636, it has since been designated as a National Treasure. The single-storied building has the image of Shinran (the founder of Shin-Buddhism) enshrined in its central altar. Photo: 663highland / CC2.5

Known also by the name of Amida Hall, this building was rebuilt in 1760 and serves as the temple’s main worship hall. It was also designated as a National Treasure, along with the Goeido. Inside, there is a wooden sculpture of Amida Buddha, surrounded by images of six of the Seven Pure Land Masters. Photo: I, Kenpei / CC BY-SA 3.0

More than 400 years old, this Great Gingko Tree stands outside the Goeido. The tree’s branches appear to stretch upwards towards the sky, making it appear like an upside-down gingko tree. During autumn, the Great Gingko tree delights visitors who come to see its beautiful golden leaves. Kyoto city has also designated it to be a Natural Monument. Photo: Ryosuke Yagi / CC BY 2.0

The Kyoto Railway Museum (formerly the Umekoji Steam Locomotive Museum until 2016) is a railway museum in Shimogyō, Kyoto, Japan. The original Umeko..

Toji Temple is one of the original three Buddhist temples that were allowed to be built in Kyoto at the beginning of the Heian period (when Kyoto replaced..

Sanjūsangen-dō is a Buddhist temple of the Tendai sect in the Higashiyama district of Kyoto, Japan. The temple was founded in 1164 by Taira no Kiyom..